November 11, 2012
A saikei is a miniature landscape composed of rocks, trees and often a riverbed of rocks and sand. For saikei you can use smaller, younger and less perfect trees, material that would probably not develop into a first-rate bonsai. The landscape you create can represent a mountainous area, a coastal region, or even a desert scene with succulents. As with bonsai, with saikei you should strive to reproduce what is found in nature.

Saikei literally means living landscape. In this form of bonsai, the artist depicts not just a tree or a forest but a full 3 dimensional landscape. In Japan the school of saikei was founded by Toshio Kawamoto after World War II. He based this bonsai art form on the principles of group plantings and rock plantings of bonsai.

Seeing the need for a form of bonsai that would be easily accessible to the average person, he created saikei. Young seedlings can be used and grown into older trees while they create a beautiful scene for us to enjoy. Kawamoto wanted a bonsai form that could look lovely even when freshly planted unlike the many years true bonsai takes to develop. His 1967 book, Saikei: Living Landscapes in Miniature has been the bible of Saikei since its  introduction.

When Kawamoto introduced this style, he did not use any well-developed trees in his saikei. As time passed, other artists took this style to higher levels by training each of the trees in the saikei. Today Saikei can be designed with young seedlings or rooted cuttings or well developed bonsai. The choice is yours and is only limited by the materials you have available and your skill and imagination.

Containers used for saikei are often oval trays, brown and unglazed. The tray should be shallow, but large enough not just for the trees, rocks, and riverbed but also for open space. Miniature houses, animals, or figurines can be included, but they should be used with care.

Material used for regular bonsai is appropriate for saikei, but is usually smaller and younger. Trees should be of the same species, of assorted heights and trunk sizes. Material with a bare side can be planted with similar material, allowing the bare areas to mesh. As in other multiple plantings, the trunks in a saikei should all be in harmony, that is, all straight or all leaning in the same direction, as though the wind has bent them.

Rocks used in saikei should be compatible with the plants used, ones that could appear together in a natural landscape. Rocks should not look as though you simply placed them on top of the soil. To look both natural and old, they should be emerging from the earth. If only a portion of the rock is available, it invites the imagination to guess its size. Large rocks should be placed in the empty tray before the soil or trees. Florists’ clay placed on the bottom of a rock and pressed against the bottom of the container should secure the rock.

Arrange and rearrange the rocks and trees until you create the landscape you envision. Wire the trunks of the trees if they need it. Branches too should be wired, pruned and pinched as necessary. If any grasses or accent plants are used, be certain they have the same care requirements as the trees.

The care of a saikei planting is a little different from that of a bonsai. Saikei trays hold more soil and will not dry out as quickly as most bonsai containers. Water according to the trees’ needs. If your trees need a little dryness between watering, be sure to check several different parts of the landscape to be certain there are not wet areas of soil.

If you are interested in learning more about saikei, there are many sources that you can find on the internet. Or if you're new on saikei, or you want to get an idea of ​​saikei, you can visit the gallery below of International Saikei Association. Visit this link: Saikei Gallery.
bonsai advanced bonsai technique bonsai variation 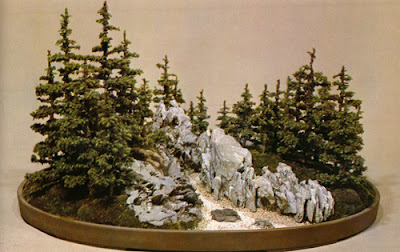 By studying landscapes in nature, we can envision saikei we would like to construct. As you travel throughout the country, take pictures of various landscapes for inspiration. When constructed the saikei will include rocks, trees, grasses, mosses and perhaps an accessory or two to complete the picture all staged on a beautiful tray or rock. Saikei Ornament img source: bonsaibark.com What is needed for saikei? First let us consider the nuts and bolts of saikei. This is a general list; there will be cases where not all items would be used. A container (see list below) Small trees (see description of ideal traits of saikei trees below) Rocks: these may need to be cut Grasses and small plants Mosses Accessories if desired Bonsai mediums ( soils ) appropriate for the species of trees Muck Wire Epoxy putty Hydraulic Cement Fiberglass dry wall tape Plastic needlepoint grid Bonsai tools and gloves Small plastic bags Grid or large paper and pencil What are the char 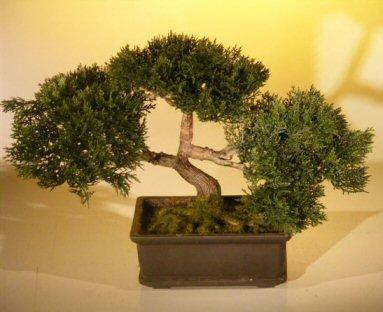 How to Use Artificial Light for Bonsai

In areas where outdoor bonsai are in storage from late fall to early spring, growing indoor bonsai has become more common. Artificial lighting can give your trees light during the winter, but taking plants indoors presents special problems. Heating outlets are sometimes located directly under windows, creating drafts of hot air that dry trees out. Incandescent bulbs also give off too much heat, which means you cannot place trees too close to those types of lighting. What is the Best Artificial Light for Your Bonsai? Fluorescent tubes, the coolest lighting available, are your best indoor light source. They are readily available and are also the least expensive to operate. Plants utilize the same rays from fluorescent tubes that they do from the sun. In terms of the color spectrum, the blue rays keep plants healthy and compact, and the red and the far red rays promote flowering. Artificial Light for Bonsai Trees image source:  http://www.bonsaitreegardener.net/ There are se 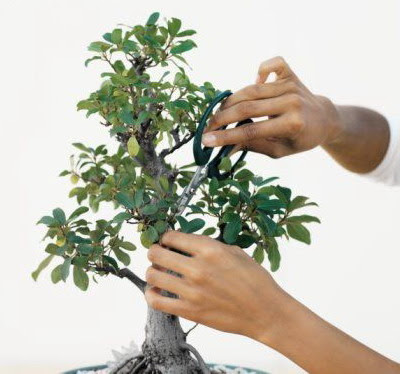 How to Prune the Bonsai Trees

The most important tool for making cuts is pruners , which should be sharp and clean. If pruning is a new experience for you, get plenty of practice before beginning to work on your bonsai. For practice, prune outdoor shrubs of branches collected from the woods. If the pruners were a Christmas gift, you can get a lot of useful experience by practicing on a discarded Christmas tree. When you are pruning, keep in mind an image of the tree you desire. Pruning the Bonsai To remove a branch, place a pair of concave pruners close against the trunk, and make a sharp, flush cut. Do not tear the branch. Shorten the Branch with Pruning To shorten a branch, make a cut just above the fork of the branch. Whenever it’s possible, make the cut toward the back so the cut will not show.  When shortening a branch, you can very often choose the direction of new growth that will occur on the branch. If you want the new growth to follow a line on the left of the branch, prune above the bud on tha 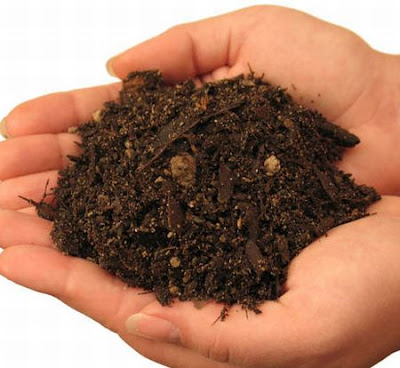 How to Choose Soil Mixes for Bonsai

When ten bonsai people get together to discuss soil mixes , you end up with ten different recipes for ideal mix. Thus the subject of potting mix can become complicated and confusing, but there is no need to let that happen. What is the Function of Soil Potting soil should support your tree in two ways. First , the soil should have enough texture to stabilize the tree in the container . Second, the soil should be a mixture that stimulates the feeding roots that supply nutrients to the tree. Soil Mixes for Bonsai A basic soil mix should be easily understandable and ready available, and should allow you to grow all types of bonsai, with minor adjustments for different species of trees. The mix should drain fast, so most water passes through and does not sit in the container. However, some water retention should occur. Texture is an important element, for the roots need something to hold onto to provide stability for the tree. Nutrients are another important element in the ba